Christian Hospital Mungeli also administers the Rambo Memorial English Medium School, which provides subsidized English Medium Education to the children of Mungeli and surrounding villages.
In1994, the Church of North India opened the Rambo School in an old mission bungalow near the Hospital. The church named the school to honor the memory of Dr. Victor C. Rambo, who served the Christian Hospital Mungeli from 1925 through the 1950s.
In 2004, lack of funds brought the school to the verge of closure, and the Church asked that the Hospital take over its administration. At that time, the Rambo School had 80 students and a teaching staff that had not been paid for some time.

In 2005, after much prayer and reflection, the CHM agreed and established this vision for the Rambo School: 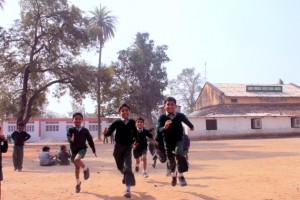 In 2012, the School enrolled over 600 children aged 7 through age 15. Of these 600 students, approximately 400 come from the neighboring villages with the help of four school buses and one jeep operated by CHM. Because the old school building no longer can accommodate the ever-expanding student population, CHM has laid the foundation for a new three-story school building that can accommodate 1,000 children.

In 2020, the school enrolled 950 children and was doing very well. The school was shutdown for 18 months. Post-COVID-19 enrollment has dropped from 950 students to 750 students because many parents can no longer afford to send their children to a private English speaking school even though our tuition costs are extremely low. Tuition varies from $94 US dollars per year for kindergarten – $241.49 for class 12. The school is currently trying to raise much-needed funds for the repair of its structures as well as the employment of teachers.