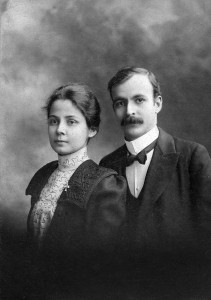 However, by 1891 Mr. Jackson became too ill to remain in Mungeli. The Mission chose Evelyn Martson Gordon to replace him.   Born in India, Reverend Gordon was a 20 year-old bachelor when he arrived in Mungeli in 1891.

The first physician at Mungeli was Dr. A.W. Hitt of Louisville, Kentucky, who arrived with his family in 1893. Dr. Hitt treated many hundreds of patients at Mungeli and did remarkable work before his medical supplies were exhausted. After 18 months in India, however, frustrated by an inability to obtain additional supplies and by his own ill health, Dr. Hitt resigned and returned to the United States.

After Dr. Hitt’s resignation, no medical work could be done at Mungeli until 1896, when Reverend Gordon married Dr. Anna Dunn Gordon.

Anna Dunn was born of British parents in Jubbulpore, India, in 1869. She attended school in Bombay, Scotland, and Brussels, earning the “gold medal” of her medical school class. After moving to Mungeli in 1896, Dr. Gordon first held clinics in a tent and in an old school building. Then, in 1897, the Gordons built the Christian Hospital Mungeli. 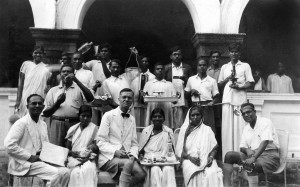 After the Gordons left Mungeli in 1907, the Christian Church (Disciples of Christ) sent other missionary doctors to Mungeli, including Dr. George Miller. During long periods when there was no missionary doctor at CHM, medical work was carried on under the direction of Hira Lal, who served the community in Mungeli for more than 50 years.

In 1925, Dr. Victor Rambo took charge of Christian Hospital Mungeli. Dr. Rambo was born in India in 1894, the son of missionaries of the Foreign Christian Missionary Society. During Dr. Rambo’s tenure, the hospital’s facilities and its ability to deliver medical services both grew significantly. By 1932, a substantial gift from a donor in the United States allowed the construction of a large and small operating room, a delivery room, and an examining room for eye patients. At the same time, the original hospital building was remodeled to contain an outpatient department, lab, and records room. Also, during the 1930s, the hospital constructed several new wards. An American missionary nurse, Eva Alice Springer, used her own funds to build several of these wards and also acted as the general contractor overseeing their construction. 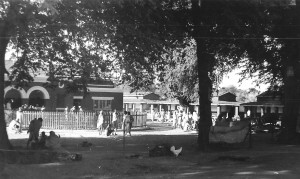 Under Dr. Rambo’s leadership, CHM became known for its work in saving and restoring sight. Because many of the blind could not travel to the hospital, Dr. Rambo pioneered the use of “eye camps,” where surgical teams from the hospital travelled to villages to perform cataract removal and other eye surgeries. The hospital conducted its first “eye camp” in 1943 at Kawardha, some 45 miles from Mungeli. Over the next 25 years, CHM held approximately 150 eye camps in more than 25 villages up to 100 miles from Mungeli, restoring sight to many thousands of the curable blind.

In 1947, Dr. Rambo began dividing his time between Mungeli and Vellore, where he taught part-time at the Christian Medical College’s Ophthalmology Department. Dr. Dayal Suknandan then became CHM’s medical superintendent, and with on-going support from the United Christian Missionary Society, the hospital’s growth continued through the 1950s. The 40-bed Bentley Eye Ward opened in 1953. The hospital completed substantial additions to the Eye Clinic and Lab in 1961. By that time, CHM had 120 beds and averaged 368 in-patients per month.

Photographs on this page are from the United Christian Missionary Society Collection held by Disciples of Christ Historical Society, Nashville, Tennessee USA. Used by permission.

For further information on the Stone-Campbell heritage visit www.discipleshistory.org.